More
The Journey of a Tausug Doctor 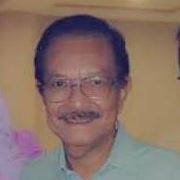 We are writing again after a 5-year hiatus, and the reason behind it is a Tausug doctor who inspires and gives hope.  The unanimous choice of an informal survey I conducted for this feature, he is none other than Benj Bangahan M.D., FPCP, FPCCP (CARDIOPULMONARY- INTERNAL MEDICINE).

WHO IS DR. BENJ BANGAHAN?

Doc Benj, as he is fondly called, is a doctor, writer, philanthropist, event organizer, historian, and a lot more.  However, overarching all these is his identity as a proud Tausug, one who loves his homeland, treasures his culture, and dreams and hopes of a progressive tomorrow for all Tausugs.

….began with Lumpang Basi’, with Sharifa Amina, an Arab from Makkah, who married Hadji Abiyal, a man from Parang.

·         He studied at Bid Elementary School from Grades 1-5.  It meant a walk measuring 2 kilometers every day. Attendance was a problem for him.  He wanted to stop schooling after he was physically hurt by his teacher  in Grade 5, but his father wouldn’t let him.  Needless to say, the young Benj was persuaded especially since his father used a guava tree branch to illustrate his point, which turned him black and blue.  Today, Doc Benj acknowledges that had his father not forced him with the guava branch to go back to school he would not have become a doctor.

·         He transferred to Parang Central Elementary School for his graduating year.

·         He had to stop schooling for 2 years due to financial reasons. Then he saw an opportunity in the form of a scholarship program, He took the CNI exam in which he ranked 3rd overall. He considers that CNI scholarship a blessing for without it the medical course would never be realized.

·          Arriving late for enrolment in Manila (since the CNI result was announced late), he took his Pre-med in 1964 at Far Eastern University (FEU), where he had to take subjects not related to premedical course but which gave him the kicks and made a difference in his life later, like Speech, Writing, Philosophy, and Arts Appreciation (Humanities) for the purpose of filling up the required number of units; most premedical subjects were all taken.  He  then graduated in the summer of 1967 and went directly to University of Santo Tomas (UST) to continue his medicine proper.  He graduated in 1972.

·         He worked in ABM Sison General Hospital while waiting for the Medical Board Exam result to be released.

·         He worked consecutively at Meralco, Philippine General Hospital, then finally back to UST internal medicine in 1975.

·         He finished his residency training in 1978, and started being an Instructor-3 in the same year, where he taught Human Physiology, Pharmacology and Clinical Medicine.

·         He took the Internal Medicine Specialty board exam and became the first Muslim Fellow of the Philippine College of Physicians (FPCP), a diplomat and a fellow.

·         He continued training as a heart and lung chest physician, and in 1985 took the board and again became the first Tausug to pass.

·         In the intervening years he formed the Tausug Parhimpunan Inc. (TPI) together with Col. Hadji Parson Nabiula (may he rest in peace) as vice-chairman and Atty. Abdulcader Ibrahim (may he rest in peace) as secretary in 1980. In 1981 the TPI sponsored the UST Medical Mission Inc (UST-MMI) in Jolo. The medical mission lasted for a week and they performed almost a hundred surgeries. The mission was coordinated with Sulu Muslim Government Employee Association (SMGEA) of Jolo. With the help of the Philippine Air Force, they were transported from Manila to Zamboanga to Jolo and back.

·         In 1988, Doc Benj published the first copy of the Tausug Krisblade newspaper which is now a part of history.  Original copies of the newspaper which covered one-year issues from 1988 to 1989 are available at the Asian section at the University of Michigan, USA. Expenses for the paper came from his clinic.  He was the editor-in-chief and his wife, Rebecca, a practicing pediatrician, was the publisher. Other writers contributed and worked for free.  Krisblade was distributed in Manila, Zamboanga and Jolo.

·         In 1991, he decided to go back to Zamboanga and put up his own clinic at Valderosa Street.  In 1993 he transferred his clinic to San Jose.  Also in 1993, Doc Benj founded the Academy of Muslim Physicians of the Philippines Inc. (AMPPI).  The academy sponsored free circumcisions every Saturday at his clinic and all the children were rendered the traditional ritual orientation by Tuan Nasser Daham (may he rest in peace).  He also revived the Krisblade for another 4 months. At about this time, he started conceptualizing his essay “The Origin of the Words Sulu and Sug”, where he presented his theory that Sulu and Sug came from “Ahlul Suluk” or The People of the Path to Allah, referring to the sufis who came to Islamize Southeast Asia, to include Sulu and Mindanaw, This in effect contested the claims of foreign history writers that the name Sug comes from “water or sea current”. 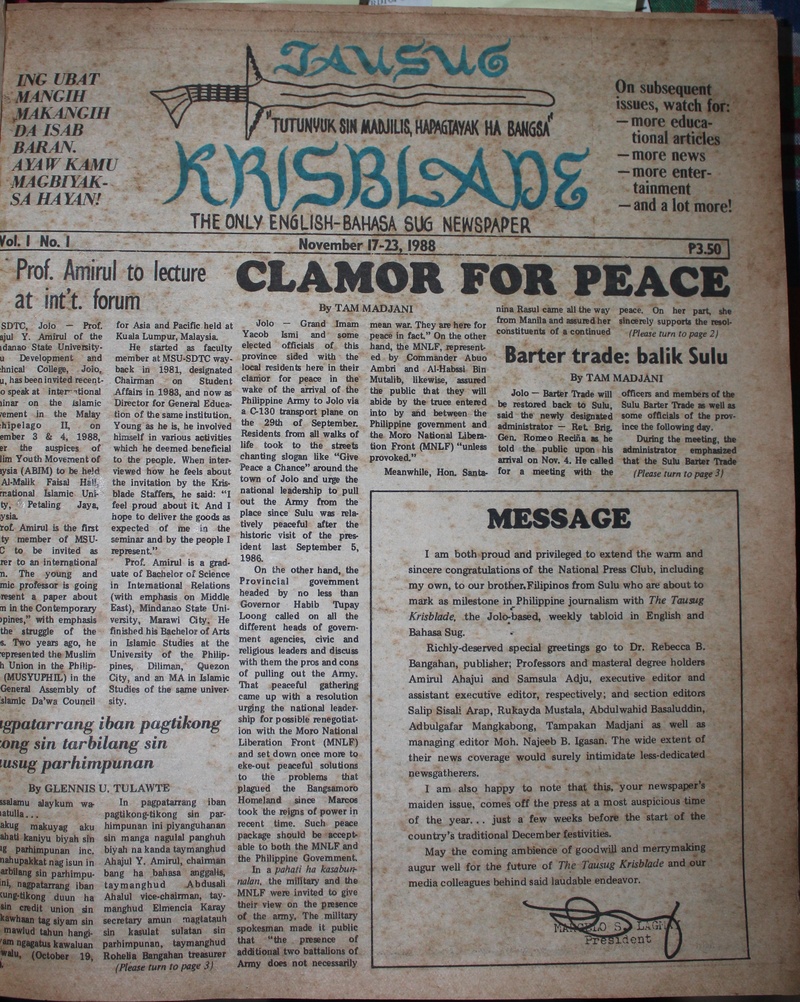 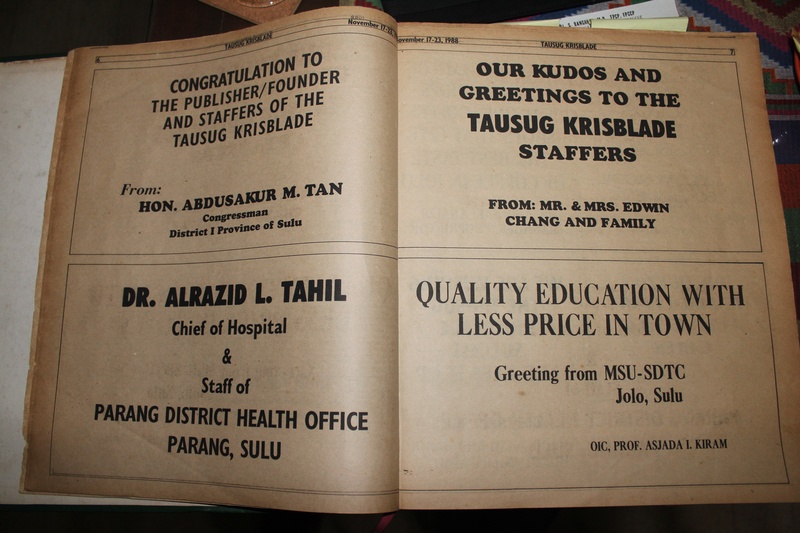 ·         In 1995 the Zamboanga Office of Muslim Affairs requested him to organize the celebration of the Hariraya Puasa in which parade of Muslims was initiated with the women in native attire, including float contest and native Tausug games, with the winners given prizes.  He headed the organization for 3 consecutive Hariraya Celebrations. He had also organized a special concert in 1989 called “Linggisan 89” in Jolo, held at the Notre Dame gym and featuring Sonny Parsons of the Hagibis and Bong Ali, plus some local talents.  Sponsored by the TPI and Tausug Krisblade, this was Doc Benj’s acceptance of the Tausug Luwas-lungsad group request for fund raising.

·         He was forced to go back to MetroManila in 1999 after all his children had gone back for their college studies, and so they were reunited in their own home  in Quezon City.  He rejoined the UST Faculty of Medicine and Surgery and taught the same subjects he had before.

·         In 2002 he started writing the English-Bahasa Sug dictionary, two years after he and his group, made up of the lawyer UP Professor Mehol Sadain, UP Prof Dr. Asiri Abubakar, UP Prof Dr Abe Sakili, Engr Hadji Karun Yusop and the UP IIS dean at that time Ustadz Wadja Esmula met to standardize Bahasa Sug orthography and translate the Quran to Bahasa Tausug at the Islamic studies in University of the Philippines (UP). This was headed and presided by the Mufti of Region IX and Palawan Ustadz Abdulbaki Abubakar. The translation project did not prosper due to undisclosed reasons.

·         The road to realizing his dream of a Tausug dictionary was filled with potholes.  In 2003, he started working with a laptop which was stolen after 2 years. In 2005, he accidentally pressed on something and lost 40 pages of work for the second time. However, determined to finish the project, he simply went back to the beginning letter “A”, but this time he started to save it the proper way, had some help from his kids in making multiple backups like saving it to a CD and hard disk until he finished everything. In 2010 he finally finished with the letter “Z”.  It took him 4 years to proof read, edit, rewrite, and find a publisher. 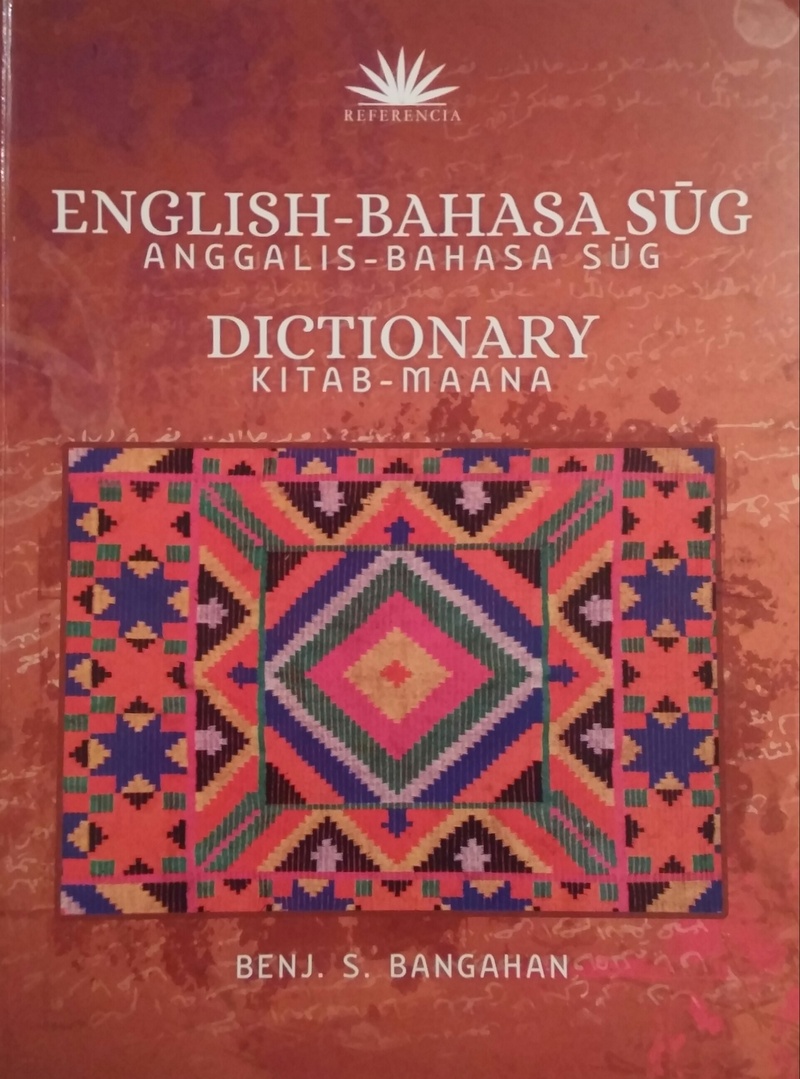 ·         Another book for which Doc Benj received recognition was the Caton children’s dictionary and textbook which he translated to Bahasa Sug.

·         Doc Benj is now retired from medicine, but is still active and busy with his book.  He is part of a team currently compiling history and gathering all the details for the history of the Tausug people.

§  If you are a Tausug, you are a proud person. ‘Waypa naka patikuppu’ ha Tausug, sabab nagtatayak sin martabbat… di’ mag iru’- iru’…’ I am a proud Tausug because; a Tausug will not beg for work or any request, a Tausug will not force himself to do something that he is not used to, which means that a Tausug will not do anything  that lowers his dignity. The bad side of it is that his being too choosy will limit his opportunity in life.

§  Tausug pride… it has its good and bad side; it depends on how you use it and understand it. A Tausug is said to say “Matay sa kaw yan!” (You will be dead) even if he is obviously in the losing side. That points to a refusal to accept defeat even in unfavorable circumstances, and his morale is still high despite all the odds. To summarize, the Tausug pride speaks his dignity.

o   On the factors that keep the Tausug from getting the best education:

§  Number one finances, number two ethos or the mental attitude of the society.  For example, a young Tausug would like to finish a course to earn money, because that is the best way to survive…it’s like an investment.  There are a lot who are bright and clever but because of lack of support and scholarship programs, young Tausugs end up not finishing college and others not taking up courses that they desire or dream of. It all boils down to economic standing.  Only the rich can go to a good school and finish the course that they desire, while the poor will stay poor and parents of the poor will force their children to work at an early age. Honestly, Lupah Sug is rich in resources. But, the people are poor.

§  Yes, but only to a certain extent.  While working in UST all my friends respect me and all of them know me and love me, but there are a few who are bigots, who base base their attitude on religion.

§  One of the dreams that I wanted to fulfill had I been rich, was to put up a scholarship program only for the Tausugs. I wanted scholars to take care of the culture, like for example, music and literature… do you know any Tausug who has taken care or preserved the music of the Tausug people? The answer is no… and not only music but other aspects of culture, which I dream of preserving.

o   On his advice to the youth:

§  First of all, what you desire to be should always be your  priority.  Never let anyone dictate what your future should be. Like if someone told you that you should be a doctor, and you are dreaming of becoming an engineer, you should always follow what your heart desires.  That way you will be happy with no regrets.

o   On Tausug professionals and going back to Sulu:

§  Yes! Yes, yes, yes. Here is my opinion; the problem in Sulu is the social mindset of the Tausug. The ethos of the people is now focused on money, on how to earn more. Before, people had sense of morality. During my childhood people had good morals in every aspect, you name it. They were the nicest people. But lately, it’s all about economic pressure. Everybody has to earn in order to survive. Now, what can we do about that today? I was once invited to go back.  I requested for a radio station thru which I hoped to change the ethos of the people. Here in Manila, the ethos of the people are the influenced by media, by TV and radio. Just like ALDUB, which has gained a big following but which is quite empty, yet people’s minds are hooked to it because of the magic of media . And that’s from TV. A radio station in Sulu is enough and it can be done.

As I wrapped up the interview, I realized a couple of things – that I will always love and cherish my culture, and that I should go back to my Tausug roots.  I can be proud of my heritage.  I can share wisdom and knowledge for the future generations.  Thank you Doc Benj.

I hope young Tausugs who read this article will go on to fulfill their own dreams.